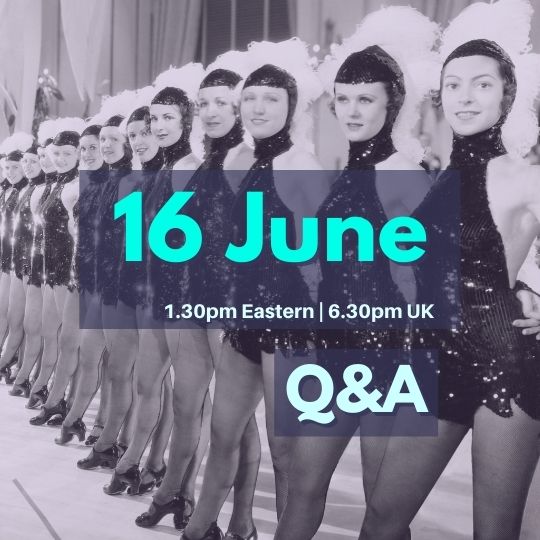 And it affected my balance and my eyesight. And so I would fall over in the street. And I felt dizzy for about four or five months. And not just a little dizzy. It was like being drunk. Now, obviously, this affected my work. I was very busy concentrating on not falling over. My brain got very tired.

And, it’s all sorted now. It’s great. Lots of neuro-physio has sorted the whole thing out.

And frankly, I wasn’t in any pain at any point. But I also wasn’t in any financial distress because my business and the way I work, supported me.

Now, I’ve always been verging on the workaholic. I worked in film for a long time and we worked like demons there. In fact, that’s how I thought you had to work. But, with the ‘year of the ear’, I discovered that actually you can work considerably less and get more done.

It was very, very strange. Let me tell you about it.

So, instead of working 10 hours a day, I would have about 2 really useful hours each day. And I would decide ‘what is the most helpful thing I can do?’ each day.

Now, sometimes, helpful meant I will go to the supermarket. Which, bearing in mind I couldn’t walk in a straight line and it was like being blind drunk and sometimes just blind, that is actually quite hard. So today’s mission might be ‘buy an orange’ and that would take my 2 hours.

But more often, it would be ’what is the most useful thing to do for my business? I have 2 hours. What is the focus?’ And I would work only on the thing that took me closest to profit and to helping my clients. What I think of as ‘the path to the money’.

And when you bear in mind that instead of working 10 hours a day I was working just 2 hours a day. That’s astounding.

And it’s because I run Masterminds.

The other thing that really helped me is that my business is quite mature and so I already have a few assets. I already have some courses done. I have some lovely sales pages written. So that I didn’t have to really create stuff from scratch.

Now, obviously, if you’re in the creation process that’s going to feel like a hard ask. But what it means is carry on. Get it done because those assets will set you in great store. Once you’ve built a sales page, it’s something you can use for years and years and years.

And that’s why, the really high-end copywriters, when they write a sales page they’ll charge $100k or $200k for a sales page because it’s an asset in your business. So, I sold a couple of courses, I ran Mastering Mastermind. I ran it live.

Now, that was much more than 2 hours those days. But it’s live – it’s just a conversation. So sometimes I could just ’look’ a little bit instead of looking very specifically. But I ran that course, I ran my Masterminds and I had my sales pages working for me. And it really helped.

Now, the real focus, the lesson to take away from this is that if we concentrate on what really works, work out where the money comes into your business – concentrate on that and only on that – Ditch everything else.

Truly, I stopped doing Pinterest. I stopped my test accounts. I only worked on the stuff that really mattered. And I got super consistent on that.

That’s how my business grew while I worked a tiny fraction last year.

And spent the rest of it listening to audiobooks and mostly asleep. And frankly – it was fabulous. I always said I wanted a year off reading. And that’s pretty much what I got. I mean sure, I wasn’t expecting to feel dizzy at the same time, but it was amazing.

So, you can do this in your business. Assess where the money comes in. Focus on that. Ditch everything else.

And, if you’d like to see some of my microblogging come and follow me on Instagram is @RethinkCentral. Because that’s where you’ll see regular updates about this.

I send a newsletter now and again – do join that, you’ll get all the information about new courses and about special deals when they come up.

But if you want to see my stuff daily look at me on Instagram because that’s one of the levers that works for me and my business. Looking forward to hearing about what works in your business.

Thanks for listening and I will see you next time.